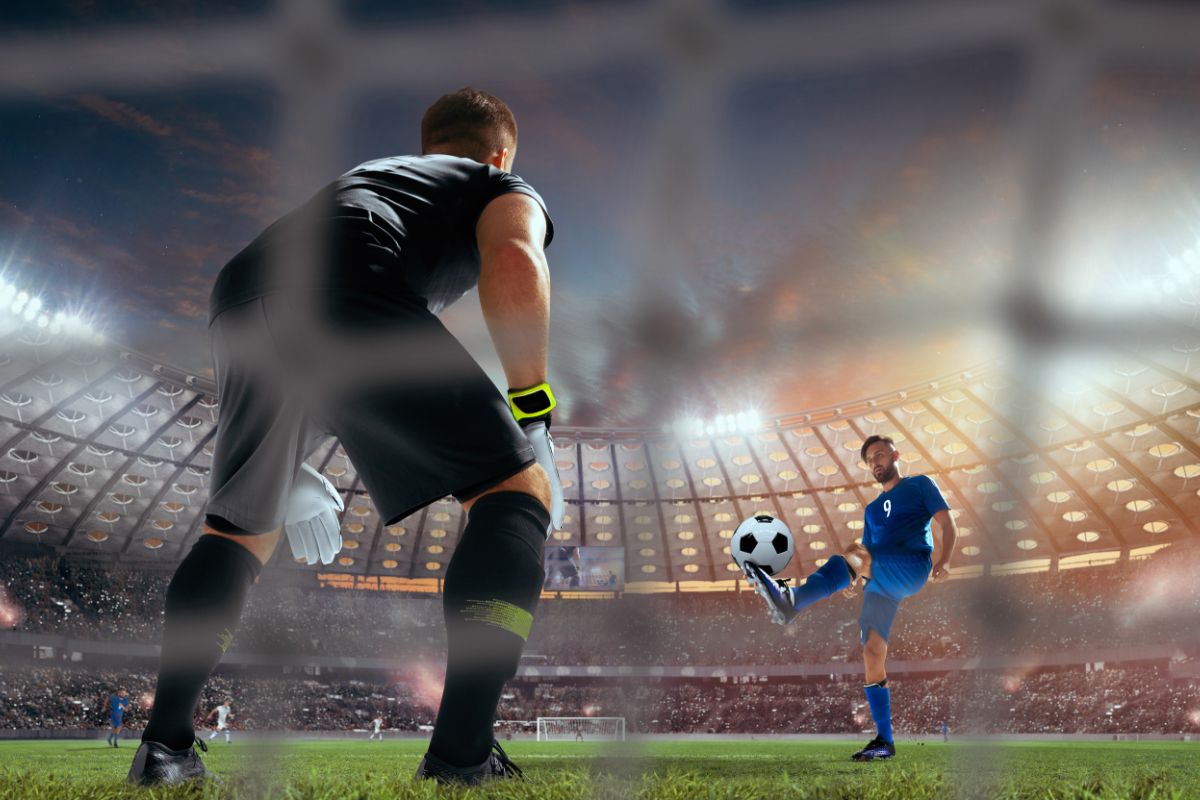 If you are a fan of soccer, perhaps just started watching it, you will have heard of fullbacks.

Fullbacks are important defensive players, and they are gaining more and more influence in the game today. They may not always make the headlines, but they do work very diligently behind the scenes of every game, and their position alone can be a real game changer if played well.

They guard the super speedy wingers, and they always cover for their teammates.

This is a position in the game which is always developing. A majority of teams now will use their fullbacks almost like extra wingers, and encourage them to contribute to the attacks of each play.

Today, we are going to take the time to have a detailed look at the position of a fullback in soccer, including the specific responsibilities of those who play in this position, and the characteristics that are required by this position.

We will also be focusing on the following:

What Is A Soccer Fullback?

A fullback in soccer is a defensive player who plays on the left or right-hand side of the backline. They are also often referred to as right or left-backs.

The primary role of the fullback is to defend all of the wider areas and to offer attacking support to other players such as the midfielders and the wingers.

In a back 4, teams will usually play with 2 fullbacks. Yet, this does depend on the formation, there are other formations which will deploy around 3 or 5-player backlines and will traditionally operate without fullbacks and instead will have wingbacks in their place.

Why Are Fullbacks Given That Title?

Back in the earlier times of pro soccer, teams would usually play a game with only two defenders, who were titled fullbacks at the time. In front of them were the center halfbacks, and over time, the strategies changed.

Eventually, halfbacks started to play more deeply in the defense, and would then occupy more central positions.

This then meant that the original fullbacks would get pushed into the wider space of the field. However, note that in spite of these formation changes, these right and left-side specific defenders are still named ‘fullbacks’, even though they do not cover the ‘full space’ as they did before.

How Important Are Fullbacks?

Fullbacks play a very important role in each and every team that they play in, as they defend opposition wingers and cover the back post overloads.

As you would find with a majority of positions, the depth of how important they are is dependent on the team’s individual tactics, and the formation that they are playing in for any particular game.

The skill level of the individual and their impact in-game is also absolutely critical to how important any one fullback is.

For some teams, fullbacks may be nearly unnecessary, as one of the least essential positions altogether. It is rather normal for a team to play wingers, center-backs, or midfielders in the position of a fullback.

That being said, a majority of more modern teams will design whole offensive systems specifically around the fullback. When this kind of tactical shape is used, the fullback will be responsible for using the space available, creating width, and making some direct chance creation.

For example, you might note that Jürgen Klopp’s Liverpool is very reliant on the fullbacks for assists and goals. The two primary fullbacks in this team; Trent Alexander-Arnold, and Andrew Robertson have been the catalyst for the majority of assists for the team 4 seasons in a row!

The 2021-2022 season saw Trent Alexander-Arnold score 11 assists, with Andrew Robertson having 10. The season before, both players had 7 assists to their name.

Prior to these 4 years of extreme success for these 2 fullbacks, Jürgen Klopp noted the importance and tactical strength of using fullbacks in this way…

“This kind of full-back is now much more of a midfield player. The kind of football that they play, in half spaces, they are the other winger at times, then the central midfielder sometimes. The general rule is: be an option, get the pass, otherwise be available for other players”.

Is Being A Fullback A Good Position In Soccer?

Fullback is a pretty good position for a soccer player to play in. For youthful players, this position helps to develop skills. Fullbacks will usually have more on-ball time than attackers or midfielders. As these tend to play in more congested field spaces. So fullbacks can enhance ball technique easier.

While their primary focus should be on the defense, a fullback also gains the opportunity to attack, especially those who may have a skill set which is much more well-rounded. A majority of players will learn their fullback positions before they move on to other roles.

Consider Gareth Bale. He started out playing as a left-back for Tottenham and Southampton before he turned into one of the best wingers of his time.

Or think of Fabinho, Liverpool’s exceptionally talented midfielder. But, he spent much of the beginning of his career playing as a right-back in Monaco.

How Do You Play Soccer As A Fullback?

So, what are the ingredients that make up a good fullback in soccer? You can’t just waltz into the position, you need a certain skill set.

To play well as a fullback, you first need to have a defensive mindset, be very hard-working, and be very disciplined.

Let’s move on to look at some of the most vital attributes that fullbacks require today.

What Do Fullbacks Do?

Fullbacks are a mix between defenders and attackers. They tend to operate around the sidelines, defending against the oppositional team’s wingers, they will also help to start up attacks from the rear.

What Are The Defining Factors Of A Good Fullback?

Fullbacks can come in a wide range of sizes and shapes, with a vast variety of skills, and physical attributes alike. While the physical characteristics of a fullback are important, like in any athletic competition, a successful fullback is more in need of some specific personality features.

These include the following:

Should a fullback be given responsibilities on the offense they will also need to have very good technical ability. A fullback who is attacking should be perfectly able to pass, dribble, and cross comfortably all the same.

They will also need to be good at possessing the pace and have the technical skill to dribble past a defensive player in a player-versus-player type situation.

Defending As A Fullback: 101

When you play as a defensive fullback, 5 very important categories are critical to doing a good job. These include being able to read the game well, ensuring good positioning and movement, having the physical ability, defending on a technical level, and being skilled at 1 v 1.

Let’s take a look at each of these categories…

1. Getting A Good Read Of The Game

A fullback has to be fully alert at all points to be able to properly read a game. Doing so will give them the ability to properly anticipate passes, prepare for a switch of play, measure up through balls, and so on.

They need to be constant in their communication with other defensive players on their team and ensure that the positioning is in sync.

You will often see a fullback lose concentration when the ball is on the opposite side, playing the opposition’s striker onside, which often leads to a goal. A good fullback will learn from this mistake.

You can read a game all you want but good positioning and movement are critical. A good backline should be moving as a unit, making sure that every player is in the correct position to cover the right places and people, thus preventing oppositional attacks.

A fullback should stay in a wide position when they defend their side. But, they also need to tuck in closer to the center back when the ball is on the opposite side.

When they are in possession, a fullback also needs to be able to properly support teammates without exposing the backline and making them vulnerable to a counterattack.

A fullback should also have good technical skills, especially with defensive jockeying, tackling and marking.

A defender should never be standing square. They should instead be defending at an angle, to ensure they can move and change their direction promptly without a fail.

However, slide tackling is important for a defender, most fullbacks will stay on their feet to avoid the risks, but it is an important skill to learn and master should they ever need to use it in play.

Being in good fitness and health is important. Even in the case where a fullback is not a large build they still need to have the physical strength and aggression to be able to compete adequately against the opposition’s attackers.

Physical health and fitness include stamina, core strength and having a balanced weight over their size is crucial.

Although 1 vs 1 defense often seems like it is all about matching off the physical ability and tackling, this is not true. Positioning and good timing are two of the most important factors in these instances.

Should a fullback already be in close vicinity to their opponent when they get the ball, they won’t have the time to assess options and build up momentum, and if you are out of position your opponent can turn, and make use of the space to take you down with a dribble.

Tricky wingers will often wait for a fullback to commit to a challenge before taking the ball past them. In a 1 v 1, the fullback should be patient and guide the opposition away from the goal, slow them down, and close the distance in good time for a tackle.

Does A Fullback Need To Be Fast?

You may wonder if a fullback has to be fast since many of them are very quick. They do need speed to be able to keep up with attackers, and a fullback who is slower will often be targeted by the opposition.

This means that a fullback can be slow, but they need to make up for it with aggression and smart positioning.

Fullback is a great position to start in and hone your skills in, but it is also a challenging position that requires a lot of physical and mental skills. They are offenders and defenders. This is a position that takes a lot of skill as we have shown you today.

Fullbacks can be critical to a team, or not so important depending on the team formation as well. They are a useful player position for many modern teams however, and their involvement has increased as the game has grown.