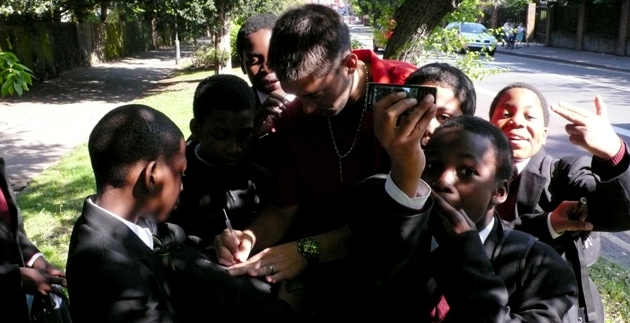 (this is part 1/5 of this story written by This is American Soccer!)

Ron Isley croons from the stereo of the Audi A6 Quattro Clint Dempsey purchased from sports agency-mate Ryan Nelsen. “You fool one day you’re here and then you’re gone.” But before the beat drops, before UGK’s Pimp C and Bun B have a chance to trade verses about making the most of the Texas youth they were dealt, before we’re even out of the parking lot of Dempsey’s apartment, we’re out of the car.

Across the street private preparatory school blazers are tossed to the sidewalk; tiny fists on fragile arms flail like loose garden hoses. “What the…. Should we break up that fight?” Dempsey asks without a glance to me, his big black eyes fixated on the fracas as if he already has his answer. “Sure, your town your call,” I tell him beginning to crack open the passenger seat door. We jump out of the car stopping traffic on the bustling two-lane road in London’s Wimbledon neighborhood. The dozen kids, no older than 12 maybe 13, turn toward us as we approach, taking notice of the bigger boys calling out, “Hey, what are you….”

So much for that. Before we could break anything up the kids are pulling out notebooks, soccer boots and soccer balls of all sizes for autographs, cell phones for pictures. A mother pushing a stroller finds herself caught in chaos. She’s confused but content to accept that she doesn’t recognize Dempsey, who in five days time will become the 2007-8 top scorer on the Fulham Football Club in the English Premier League. I corral the kids to one side, allowing her space to pass and then go to the car for my camera. The whole episode ends with a group photo.

“It’s hilarious you were here for that,” Clint says back in the car, his voice competing with UGK who is again filling the Audi’s interior as we make our way to the dry cleaners and then lunch at a burger joint that serves up American memories for the ex-pat player. “You were asking before but—I wasn’t lying—that’s the first time I’ve really been recognized.”

He’s being inducted into his alma mater’s athletic hall of fame. He has the key to the city of his hometown in Texas, the adoration of a nation of national team fans, but here in England Clint Dempsey is relatively unknown. The 25-year-old American soccer star, newly married and expecting his first child, is in a funny place, to say nothing of being a 25-year-old-with-a-kid-on-the-way. He’s making plenty of money playing soccer in the world famous English Premier League. He is one of only a few attacking players on the United States Men’s National Team consistently in the starting lineup, making him one of the most popular players in a nation starved of soccer heroes. But Dempsey has to constantly fight for a spot in the line-up for Fulham, a historic if historically mediocre club, and critics are now beginning to question the former player of the year’s national team starting spot.

The general consensus from the cab drivers, bartenders, and fans I spoke to over my 12 days in England last May—those who knew who he was, that is—thought Dempsey to be a fine player, but they weren’t quite sure what to make of him. Unlike the considerations given by American fans, Dempsey is seen as soft in certain English circles. “He’s no Brian McBride,” several said, unwilling to accept that maybe Dempsey is a different kind of player. The U.K.’s Guardian newspaper ran a preview of Fulham’s 2008-09 season recently without mentioning Dempsey at all. He’s played just sparingly in the first few games of 2008-09’s season after starting at the end of last season.

We don’t often think of our all-stars as having to fight for playing time or media attention, but such is life for America’s best soccer players in Europe. I’m thinking he can still wholly relate to his favorite Texas rappers. It’s not the crack game, but nearly every step of the way, this Texas baller has had his work cut out for him. If you’ve read anything about Clint Dempsey, you know he had to hustle too. One day you’re here and the next day…