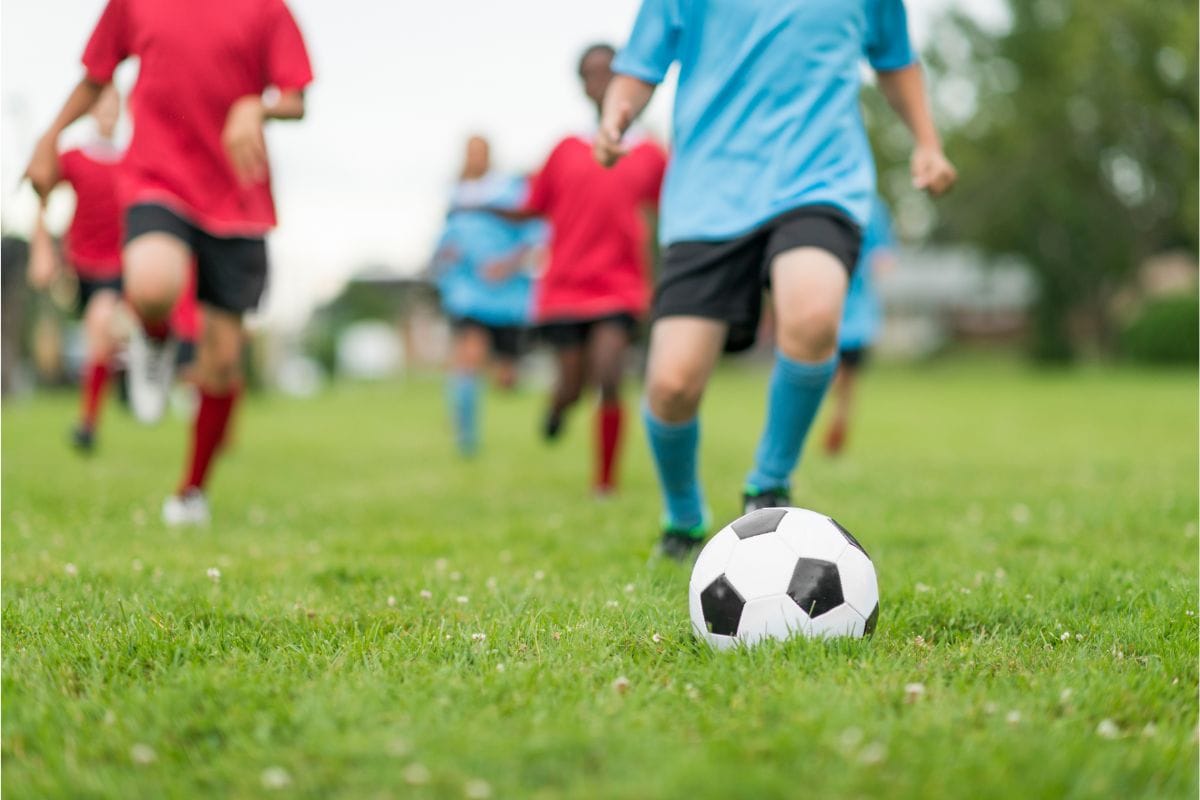 Soccer is a game that features a lot of different roles. Although the object of the game is simple—score more goals than your opponent—over the years the game has become more complicated and there are now deeply rooted tactical formations and jobs for each player on the field.

If you’re new to the world of this sport and want to know more about the individual roles within Soccer, then you’ve come to the right place! In this article, we’re going to be taking a look at the Winger role in Soccer—what position it is, what it does, and why it is important for a team.

We’ve also made sure to include a comprehensive look at some of the most famous wingers throughout soccer history, as well as a short Frequently Asked Questions section that will help explain any questions you may have left over at the end.

The Winger In Soccer – The Basics Of A Soccer Field

To understand what position a winger fulfills in a game of soccer, first, we need to have an understanding of how a game of soccer works. In short, each team has 11 players, ten on the field and one goalkeeper.

Aside from this, there are no strict rules about team composition, but modern football has seen most teams fall into the 4-4-2.

This strong defense and mid presence have been the basis for a majority of soccer tactics over the last 70 years or so, however, there are many variations and you’ll often see a lot of difference when it comes to the style and skills of specific players.

The Purpose Of Midfielders

Midfielders are the central body of a soccer team. As their name suggests, they play around the center of the field, covering the entire length of it. A midfielder’s job is to both attack and defend, build plays, and create opportunities for the forwards to score goals.

Although there are many different ways that this can be achieved from the center of the pitch, a really effective way to break ground and create scoring opportunities is to use the sides of the field. This is where wingers come in.

Wingers in soccer are the members of the team who exploit the wings or sides of the soccer field. They are typically very fast and agile and have incredible skills when it comes to creating crosses that allow forwards to score.

Wingers do a lot of different things over the course of a game of soccer, but a classic movement for one would be to sprint down the side of the field, evading defenders, stopping in the very corner of the field, and then launching a cross for your forwards to take advantage of.

This is a play you’ll see very frequently in games of football, from beginner all the way up to professional. However, it does take some skill and a lot of drilling to get right.

For this reason, wingers need to be fast and responsive, with a good understanding of what’s going on in every part of the field.

Wingers also need to have a good understanding of the midfield and how they can both attack and defend depending on what’s happening in the game.

A Winger’s responsibilities may range from tackling forwards, to creating space and outsmarting defenders. It all depends on what is happening and how the game is going.

There are a few essential skills that wingers need to succeed in football, and although many wingers have different styles, but most of them will possess some of the same traits. We’re going to explore wingers in more detail over the course of the next few sections.

Essential Skills For A Winger

To become a successful winger, you must consider a few essential skills. In this section, we’re going to take a look at each of them and explain how they can positively impact your next soccer game.

The more tricky and aggressive a winger is, the more difficult it is for the enemy defense. By creating space around the wings of the field, you will be able to disrupt their defense and make it a lot more difficult for opposing defenders.

2. Learn How To Create Goal-Scoring Scenarios

One of the real strengths of a good winger is their ability to create goal-scoring scenarios. This means learning how to be agile down the wing, how to pass to your forwards, and allow them to score.

You also will have a lot of opportunities to be able to score yourself as a winger, so you’ll want to learn some simple skills that will allow you to capitalize on the opposing team’s mistakes or small holes in their defense that you can exploit.

Although you don’t defend that much as a winger, you are a member of the midfield section of a team, so you will have to do something to help support your defenders. This can be chasing down the opposing wingers, or constricting the space of forwards.

Either way, you will need to contribute to the defense of your team, especially when the opposing team is on the attack.

5. Perceiving Openings On The Break

Openings on the break are one of the most important things for wingers to learn. If a winger can spot an opening, and they have the pace to chase it up, you’ll often find game-changing scenarios.

This kind of pressure can be a great thing for your team, and this is something that wingers should consider when playing and training.

A Short Guide On Crosses In Soccer

Crossing is one of the techniques most associated with wingers. Although it’s not their only job, improving crosses is a surefire way to become a more effective winger for your team.

What Is A Cross? In short, a cross can be defined as a medium to long-ranged pass from a wide area of the field (for example, the wings) that goes towards the center of the field.

This allows a forward or other players to intercept the ball and send it right at the goal. This is one of the most common forms of setup for a goal in football and something you’ll see many times over the course of games.

There are a few different types of crosses that you should be aware of, so let’s take a look at them below.

Whipped Cross: This is a cross that’s off the ground and can vary in terms of height. The ‘whip’ part of their name comes from their short range and fast movement, allowing another player to take a small tap and put the ball in the back of the net.

Floated Cross: This is a type of cross that sails through the air and shoots towards a team member who can make the most of its slow pace. Floating crosses are best responded to with a strong header.

Low Cross: A low cross makes use of the field and is fairly close to a standard pass—the big difference here is power. Low crosses can bend, or be extremely powerful to allow a small tap from a teammate to result in a goal.

Over the course of soccer history there are a lot of examples of different players that have risen to the top as wingers. Wingers often create some of the most exciting and magical moments within a game of soccer, so they often become famous and renowned.

In this section, we’re going to look at a pair of wingers who are well-known for their skills and performance within professional soccer.

Mohamed Salah is an Egyptian soccer player who is most renowned for his time playing in Liverpool Football Club. he is widely regarded as one of the best players in the world, and one of the best wingers of all time.

Mo Salah typically plays on the right flank as a winger, but he’s a very versatile player. His typical modus operandi is to cut through from the right flank and attack with his strong left foot. From here, he will either pass with his teammates or shoot on goal.

Mohamed Salah is a great example of a player who is a winger but also poses an extreme goal threat whenever he cuts down the right flank.

Gareth Bale is a player from the UK who spent his time at Tottenham Hotspurs as a winger. He was extremely effective as a winger over the course of this time, with impressive pace and attacks that pierced the left flank of the opposing team.

This then allowed him to create textbook crosses with high accuracy.

Gareth Bale is a more traditional winger when compared to Mohamed Salah above, but both of them possess similar traits, including stamina, speed, and accurate ball-handling skills.

So that was our short guide on what a winger does in a game of soccer. Wingers are some of the most important parts of the attack of a team and are integral when defending.

We hope that this guide has given you a good understanding of what they do and why they’re important, and that you can now analyze a game of soccer better and spot the important work that wingers perform.

If you still have some questions, make sure to keep reading for our extensive Frequently Asked Questions section that will break down some of the most common questions about wingers you might still have. We wish you the best in your soccer journey, whether you play or you’re just a spectator!

Is A Winger A Forward Or A Midfielder?

Even though we previously categorized a winger as a member of the midfield, this can be controversial depending on who you’re speaking to. Typically, a winger will be what is classed as an ‘attacking midfielder’ meaning they are in a wide position and responsible for setting up scoring opportunities.

However, you will also find wingers who act far more like forwards than midfielders. Mo Salah, who we mentioned above, is a great example of a winger who frequently acts like a forward with his impressive plays and shots.

Is Winger A hard Position In Soccer?

The winger is generally considered to be one of the most difficult positions in soccer. This is because of the high physical demand that it has for a player.

Wingers are expected to frequently cover large stretches of the pitch in short periods of time, meaning they must have good sprinting and endurance skills.

More than this, wingers must also be able to attack, defend, have good vision, and be able to shoot on goal when the opportunity arises. All of these skills combined mean that a winger is one of the most demanding roles in a team.

What Are The Main Attributes To Work On For A Winger?

If you’re looking for specific traits that a winger needs to cultivate, then there are a few important ones to keep in mind. Great wingers tend to possess impressive sprinting skills, stamina and endurance, and a fast mind.

This last one is sometimes overlooked. Wingers must have extremely fast reaction times, in order to exploit holes in their opponent’s defense to create scoring opportunities.