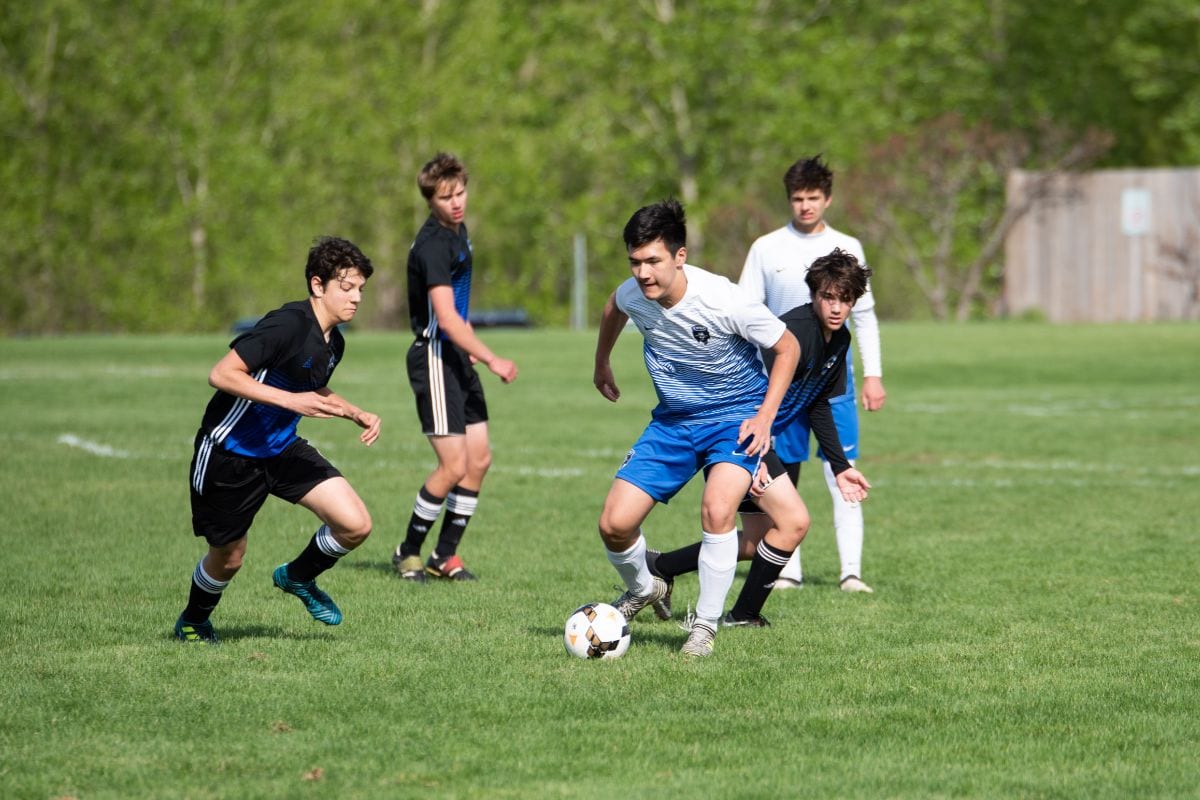 For as long as human civilization has existed, the game of soccer has seemingly been played. Many believe that the game we enjoy today actually dates back as far as the Han Dynasty of China from 206BC.

Others believe that the origins of soccer go back even further to the Mayans and the Aztecs of Central America around 1600BC. However, the set of rules that were formalized for the game of soccer were created by the English in the late 1800s.

In this guide, we will look at the beginning of soccer to find out when it was invented and the English organization of soccer including the rules of the game.

We will also look at the first soccer clubs, the origin of the first club cup competition, and the first professional soccer league.

When Was Soccer Invented?

While the home of soccer is claimed to be in England, you can trace back the origins of the game thousands of years ago and thousands of miles away.

One of the earliest forms of what we now call soccer has been traced back to the Han Dynasty in China. This was a game known as ‘Tsu’Chu’ or ‘Cuju’ during the period between 206BC and 220AD. Essentially, the name of the game translates to ‘kicking the ball’ which sounds incredibly literal.

A competitive form of ‘Tsu’Chu’ was enjoyed by the Chinese military who use the game for fitness. From there, the game’s popularity spread from the military to the royal courts and even to the upper classes.

The game was played for entertainment in cities like Linzi which was a wealthy and upmarket place to be. Back then, they had different soccer field dimentions such as the ball was around 35cm wide and the net was constructed from bamboo canes as well as elevated some 30 feet off the ground.

The game progressed to the Tang Dynasty between 618 and 907AD when the early form of the ball changed.

Originally, balls would be stuffed with feathers and hair which were eventually replaced by a two-layered hull of a ball filled with air.

New goalposts also became known at this time, one had posts with a net filling the gap in between while the second one was simply a goalpost put in the middle of the field.

Several similarities with the modern game we know and enjoy as soccer were formed around this time. For one, ‘Tsu’Chu’ or simply ‘Cuju’ was played on a rectangular-shaped field with the game being played between two teams.

At this time, the use of a player’s hands was also outlawed with the basic premise being of kicking the ball into the opponent’s goal. Even to this day, teams in China exist to play the game as it was then.

While China seems to be where the game of soccer originated, there was a similar game being played in Central America much before then. This pre-dated the Chinese interpretations all the way back to 1600BC.

Though there are few similarities with the game now, an I-shaped court was used for the Mayan game of ‘Pok a Tok’, which the Aztecs called ‘Tlachtli’.

There were still two teams and you were not allowed to use your hands while the ball was kept in the air towards an opponent’s end.

Another key difference was that both games were religious and not recreational. A forfeit for members of the losing team could be their sacrifice to the gods.

Aside from that, this is a version of kickball which does come a few centuries before the Chinese.

While the English may not want to admit it, Scotland may have a claim to soccer that predates theirs. This goes back to 1424AD and is focused on the oldest known football in existence being found at the Royal Palace of Stirling Castle.

That would date the ball back to 1540AD and the game of soccer was known to be outlawed by King James I who deemed it too disruptive.

Another claim to the game comes from ‘The Foot-Ball Club of Edinburgh’ being formed in 1824, a very early version of a soccer club to be formed.

The English Organization Of Soccer

Soccer had been played in England since the 9th century when a pig’s bladder was kicked around. The game became such a nuisance that it was banned in certain areas of the country.

Until the 19th century, the game was still some strange mashup of rugby and soccer as players could still grapple and even handle the ball.

The game was also pretty rough as only high tackles were penalized and crossbars were yet to be featured which was holding its progress back.

Gradually, some separate interpretations of rugby and soccer became more well-known. Games at Eton College included rules where the ball was moved only by the feet as it became known as ‘the dribbling game’.

However, at Rugby the ball could be picked up and kicked and that game became ‘the running game’.

What we think of as soccer tends to be the English interpretation of the game when rugby was separated from soccer and the game was played in British public schools.

The ball’s size was still undefined, as was how long a match would take to conclude, and even the number of players on each team.

In 1848, a meeting was held in Cambridge to work out the laws for the game and it was in 1863 that the Football Association was established in England.

This gave a form of organization to the game of soccer as matches were set in schools and colleges.

It took until 1889 for the Football Association to hold the very first international match when Scotland beat England 2-1 in London.

Quickly, football associations were created across the globe as the Scottish Football Association was created and by 1900, over 200 associations had been formed.

The Rules Of The Game

The game of soccer was played by various sets of rules in its early form in England. These rules went some way to broaden the game’s understanding from that of rugby.

Players could no longer run with the ball while holding it, throw-ins, corners, and free-kicks were introduced as was the concept of offside.

These various sets of rules included the Cambridge Rules, followed by the Sheffield Rules, and concluding with the Football Association Rules.

There had been an initial attempt to codify the official rules of the game of soccer back in 1848. Teachers from various schools met at Trinity College in Cambridge University to set about making a set of rules for the game to be played.

The Cambridge Rules were formed which banned running while holding the ball (though hands were still allowed to be used in contact with the ball) while allowing for throw-ins to be taken with just one hand.

A goal was scored when the ball was kicked between two flags and under an elevated string and players on their team had to wear matching colored caps.

A general meeting at Sheffield Football Club was called in October 1858 where the Sheffield Rules were formed.

Further definition was provided for a throw-in, corners, and free kicks, while physical contact was reduced in a set of rules which spread across the north of England.

While the Football Association came into being in 1863, the offside rule had just been introduced though it took until 1877 for the official rules of the game to be established. That process began after a meeting at the Freemasons’ Tavern in London on October 26th 1863.

Representatives from 12 clubs were present, including Ebenezer Morley who is said to have been the ‘father’ of the Football Association and even the inventor of football.

Back then, he was the founder of Barnes Football Club and had effectively called the meeting having sent a letter to Bell’s Life newspaper.

Soccer still needed a set of rules and the meeting in 1863 was the start to establish those official rules. In 1877, those rules were created with some being already well-known in the game of soccer, such as 11 players for each team and that a goal could be scored from anywhere on the field.

The Football Association also confirmed that carrying of the ball in open play was to be outlawed. The size of the ball was formally defined with its weight and tripping, as well as shin-kicking, was outlawed.

A few years before the Football Association was first established, a few soccer clubs had already been created. The very first soccer club was Sheffield F.C. which was founded on 24th October 1857.

Despite soccer’s association with rugby, Sheffield F.C. was formed after members of a local cricket club would play soccer without any formal rules.

Another prominent early soccer club was the very first winners of the FA Cup; Wanderers FC which was an amateur team formed in 1859 which was not required to pay their players (see also ‘The Complete List Of MLS Player Salaries‘).

They wore shirts when most teams still wore shorts with long-sleeved jerseys but by 1887, the club had dissolved. The oldest professional soccer club still in existence is Notts County who were formed in Nottingham in 1862.

Aside from being the first club from outside the top division to win the FA Cup, their black and white striped jerseys also inspired the shirt design of the Italian club, Juventus.

The Origin Of The First Soccer Club Competition

That first FA Cup was competed for over 13 games with Wanderers being the inaugural winners of the competition in 1872. Wanderers received a bye to the following year’s final and retained the cup having beaten Oxford University in the final.

The Football League was the first professional soccer league and was formed in 1888. The format ran from autumn 1888 to the spring of 1889 which avoided summer when a lot of focus in England reverted back to cricket.

Twelve member clubs formed the Football League and they came from the Midlands and the North of England.

While the league began on 8th September 1888, it took until late November that year for a points system to be agreed upon with two points awarded for a win and a single point to each team for a draw.

The game we understand and love as soccer likely came into existence when the Football Association in England formalized a set of rules. Those included the offside rule as well as definitions of throw-ins, corners, and free-kicks.

The game of soccer could date back as far as 1600BC to a game played by Mayans and Aztecs where a ball was kicked.

It was also in England where the world’s first club cup competition was formed, the FA Cup, and where the first soccer clubs were formed.

The world’s oldest professional club is still in existence which is Notts County. However, the title of world’s oldest football club goes to Sheffield F.C., a feat that meant the club was recognized with the FIFA Order of Merit in 2004.

What Is Known To Be The Most Popular Sport Played Globally?

When the World Cup Final is being played, most of the world is said to stop and watch. That’s largely because around 3.5 billion people are fans of the sport of soccer and that includes 250 million players.

The game is played across 200 countries which few sports can rival. Cricket is the next popular sport with 2.5 billion fans worldwide while basketball is not too far behind with 2.2 billion fans followed by field hockey with 2 billion fans.

What Are The Underlying Reasons Behind Soccer’s Popularity?

The almost total accessibility of soccer is one of the reasons why it is so popular. Anyone can play the game of soccer, regardless of their gender, ability, age, or if they are rich or poor.

That distinct lack of barriers has made soccer spread far and wide. You simply need a ball and some markings to play the game.