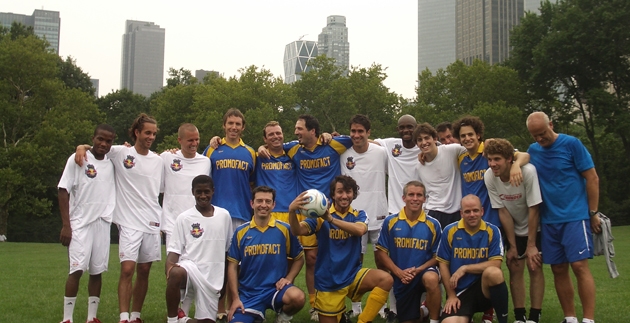 RBNY players with Steve Nash (standing, 4th from left) and one of his several summer soccer teams

Well, it was the Central Park Conservancy employees that were bullish on Tuesday in Central Park’s Sheep Meadow, but the Red Bulls couldn’t say they should not have known better. What it added up to was a lot of standing around and not much else.

many more photos and what did happen after jump…

The whole production, and I’m using that term loosely, was intended for little else than a fun day for RBNY players, families, and friends. And by friends I mean two-time NBA MVP Steve Nash and one of his several local soccer teams (this one sponsored by Promofact and made of all Italians; he plays with them in Chinatown, sometimes against the RBNY front office pick-up team).

Nash has grown friendly with Red Bulls players and staff since their meeting during the Barcelona tour last summer when Nash trained with RBNY, traded jerseys with Ronaldinho, and attended the match between the two teams. Nash lives in Manhattan during the NBA off-season. He told me last year at Pier 40 when one of his team’s was playing before mine, that the city’s soccer was a large part of the reason for being here. Short white guy, NBA MVP who loves soccer. How can you not love that.

Eric Tosi, the Red Bulls press officer on duty, said only that they were looking for “pick-up in its purest form,” and that RBNY had no other agenda. No press was previously told of the event, but obviously they got club brass’ blessing before showing up. Red Bull participating players consisted of Juan Pablo Angel, Claudio Reyna, Jerrod Leventure, Dane Richards, Joe Vide, Elie Ikangu, John Wolyniec, and Seth Stammler.

Everything was going swimmingly. This was looking like it could be something kind of special. RBNY players and families trickled in from the surrounding trees like dead baseball heroes from the corn fields of Iowa. A picnic ensued, but as jerseys went on and the balls went up, officials – it’s always a ref isn’t it – quickly swarmed the space that had a few gawkers, a few professional looking photographers, one videographer, one New York Times Ski and Cycling reporter, and myself.

The astute Joe Tiernan was there, who helps with Super Soccer Stars in New York, and who posted on Ives’ site earlier today that Sheep Meadow wasn’t going to work when Ives let out the news of the event. How right Joe ended up being didn’t surprise him a bit. Indeed, it didn’t really surprise any of us who have dealt with the difficulties at times of finding a game in Central Park or really any place in Manhattan.

The team was sternly asked to remove their cleats and their best soccer shin guards and put their training balls away, as Sheep Meadow is designated only for “passive playing.” The players and children kicking, passing, and juggling stopped and everyone stood around until an alternative was reached. The alternative really was no alternative at all, as the teams’ only option was a dire strip of hard pan that sat behind the meadow. Gee, thanks.

Technically, the Cental Park Conservancy could have made the teams leave all together, as apparently no structured promotional events are allowed in the park without permission. According to one of the park officials, the fact that there were teams and jerseys and more than 25 people made it an event, and the fact that photographers were there made it promotional. One of the Promofact-sponsored players made a joke about how everywhere Steve Nash goes photographers follow, so how are they supposed to control that, on public space no-less, but the Central Park employee didn’t laugh, shooting back something to the affect of: does he wear jerseys and cleats wherever he goes?

This was a battle neither Red Bull or some crafty New York footballers were going to win. It was one part mismanagement on Red Bulls part – they absolutely should have known about the regulations – and one part over-management on the Central Park Conservancy – their rules are awfully strict.

It really could have been something special.

Jerrod Laventure, for one, was pscyhed to play Steve Nash. “We’ve seen Nash play and know he is good,” the young Red Bull told me. “So we knew the team would be good. Hopefully it can happen another time. Whenever he wants a game, we’ll be ready.”

I approached Angel, who wasn’t rude, but you could tell he found the whole episode at least a tad frustrating. This was no doubt not how he envisioned wasting an off day. So what did you think of the idea of this game, I asked. “What do you mean, we didn’t even get to play,” he said, smiling, walking away and not entirely understanding my question. No, sorry, I meant just the thought of playing here in the park pick-up style, I followed. “It was great,” he replied toungue in cheek. “The first goal was great.”

My final thought, spoken aloud but not intended really for anybody: I wonder if Jeter and A-Rod and the Yankees would have faced the same park opposition if they showed up wanting to play some stick ball? We’ll probably never know though, which really, when you think about it, is why soccer is so fun here in the States. Where else is this kind of low-key, oh-my-god-I-can-touch-my-hero day going to happen?

So did you got inspired by this article? Feel free to read my background story here and learn how you can become as soccer writer as well!