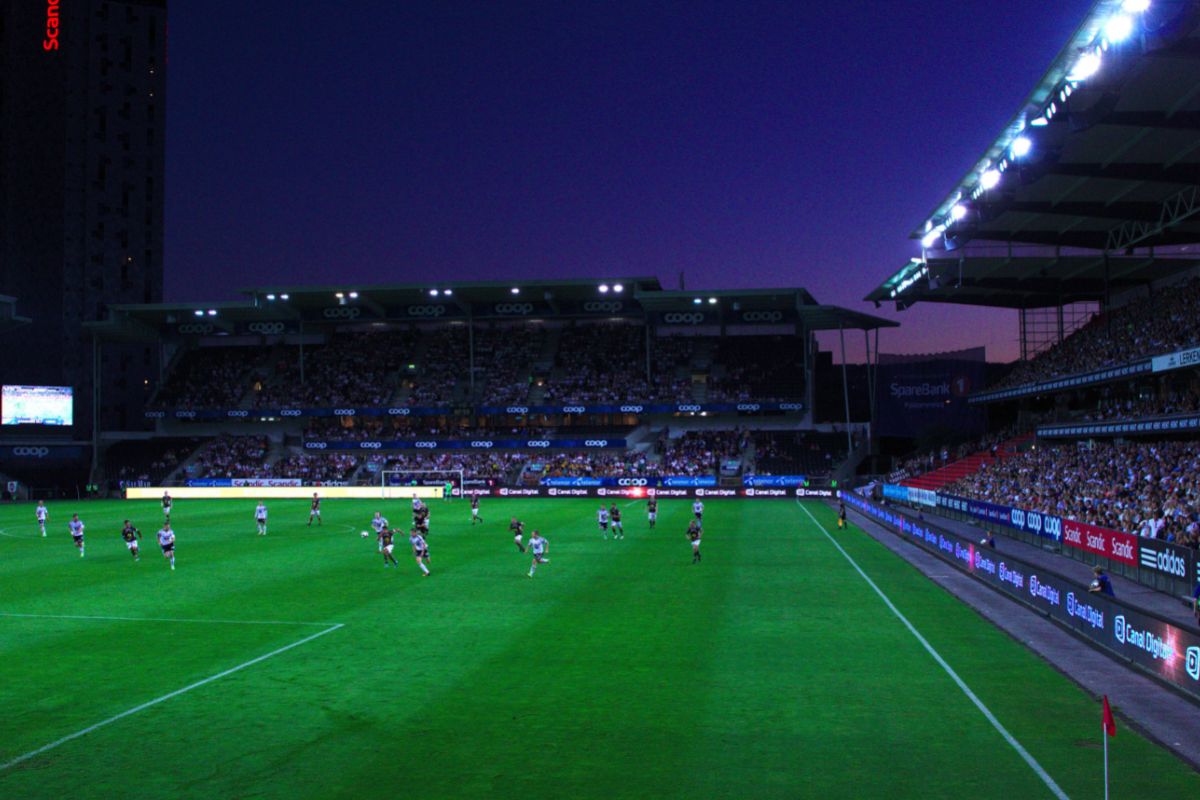 Throughout the youth into professional leagues, the numbers of soccer players on the field varies. More players may sit on the bench in certain contests.

Yet, until a player is dismissed from the game or suffers an injury and there are no substitutes available. Each team must have the same number of players.

When a substitution can be used, the rules vary depending on the level. While, when someone enters the field who shouldn’t be there, odd things happen. Rules change depending on whether you are watching a youth or professional soccer game.

In this article, we will examine how many players should be part of a soccer team and how many people should be on the field at one time. We will look at all possibilities and what this could potentially mean as well.

The Amount Of Players In A Soccer Team

On a soccer field, there are 22 players—11 from each team. Each team will have a goalkeeper as well as other players on the field. Yet, the game cannot be played if one team has less than 7 players.

Soccer is a team sport that requires cooperation between the players. If a side has fewer than 11 players, winning the game requires even more commitment, teamwork, and strategy.

However, there are a few circumstances in which there will be fewer or more players on the field at once.

This article examines the maximum number of players, referees, and spectators that can be present on the field at once.

This is because, on a field when it comes to a soccer game, you won’t just find soccer players. There are a range of other people on the field doing an important job as well to keep the game going and fair.

The type of people that you could potentially see during a soccer game on the soccer is the following:

When we are comparing youth teams and professional teams, you will notice that fewer players are required for youth teams.

However, we will go into further detail about youth teams and their numbers further on in the article.

Number Of Defensive And Offensive Players In A Team

Every soccer team assigns a few of its players to concentrate on protecting the goal.

Although the number of players deployed in defense during a game is up to the team’s coach, most soccer games typically have six players.

What Is The Minimum Amount Of Players A Soccer Team Need?

Play shall continue until there is a pause if a team loses more than 7 players during a match due to a player going off or injury. Each team must have a minimum of seven players for the game to restart.

Both sides must be handed over to the referees prior to a soccer match. The starting 11 as well as the subs are included in this. They are unable to play if their names are not announced prior to the game.

The regulating body of FIFA, known as IFAB, determines the number of players that is needed for a soccer game to proceed. In addition to that, depending on the age of the squad, this will determine how many players are needed for a team.

These figures are the number of players that are starting on the pitch. As we stated above, you can have other players in your team, including extra players and substitutes.

How Many Substitutes Do You Need?

This figure will be centered on the FIFA regulations. Depending on the competition, teams may nominate 3–12 substitutions every game.

The league’s governing body determines how many substitutes can be used in a given game. In some competitions, if the game goes into extra time, the team may be allowed an extra substitute.

If there are no “National A-Teams” involved in the match. Then both teams can come to an agreement on the number of substitutes before the game starts.

This is as long the referee has been informed as well. The most substitutions that can be used, if no agreement is obtained, is 6.

Competitions And The Number Of Substitutes Allowed

Depending on the competition, this can affect how many substitutes you are allowed as part of your soccer team.

The following are some of the major competitions you will come across and how many substitutes each team is allowed to have.

It is important to note, that for the UEFA Champions League and UEFA Europa League finals, both teams are permitted to have 12 substitutes on the bench. This allows the managers and teams to have more options to decide between during a game.

How Do You Substitute A Player In Soccer?

The substitutes will also be announced prior to the game, along with the squad. As a result, the referee is informed of who will be on the bench.

The referee must be informed of a substitution before it occurs, and the following guidelines must be followed:

The referee will advise on the best way to remove a hurt player from the game. Steps 1-3 are carried out if the athlete has already left the field.

What Happens When You Want To Substitute A Goalkeeper?

The same protocol applies to goalkeepers. The referee should be notified whenever an outfield player switches places with the goalkeeper. If the referee is not notified of the alteration, both players receive warnings.

There are no penalties if a player is listed as a substitution but starts the game. The player who was starting can move to the substitution bench. Nevertheless, the referee will also alert the authorities.

Before a game, players may be sent off. In this case, the player is unable to take part in the game.

How Do Youth Soccer Substitutions Work?

In some youth games, players can be changed mid-game. The player may return to the game at a later time, as another substitute. This is as long as the game is still in progress.

This can be repeated multiple times to give the young players time to become used to the game and give the coaches some leeway.

It’s a nice method to test things out with your squad during a game. Some of your team’s members would benefit from a break from the game, while others might need coaching tips.

Avoid making too many adjustments because doing so can throw off your team’s balance and make it unclear to players on the field where their partnered teammates are.

What Could Happen If There Are Too Many Players On The Field?

The ref will count the players present on the field before a game to make sure there aren’t too many. The referee will follow the following procedure if there are far too many players on the soccer pitch;

The ball will be given back to the team in possession if there happens to be far too many players on the pitch to continue. They are also awarded a direct penalty or free kick.

A dropped ball happens if the ball isn’t in possession of one team.  In addition to this, the referee will halt play and give a penalty or free kick to the team in possession if a player, coach, or official joins the playing field during a match.

Finally, the game is stopped, and a dropped ball is awarded if a spectator enters the playing area. Although, the ball may be moving toward the goal during an attacking play when a new player enters the pitch.

In this scenario, even if the additional player touches the ball, and it enters the goal, the goal will remain.

Scoring A Goal With An Extra Player In The Game

When a player scores and the referee is unaware that there is an additional player on the field, the goal will be ruled as invalid.

If this extra person is a coaching staff or member of the squad, then the referee will give the opposing team a direct free kick.

Although, if the extra player on the field isn’t from either of the teams, then the referee will award a dropped ball to the team who was in possession.

With that being said, there are some circumstances when a goal will be allowed if there is an extra person on the field.

This is when the play was not disrupted by a spectator or someone from outside the game. Or the extra player was part of the team that conceded.

How Many Players Are Allowed For Each League In A Team?

Before the start of the season, the soccer teams are chosen. Cup competitions have varying time limits. The majority of leagues permit the inclusion of players from the young team to the roster.

There can be modifications, but the numbers must stay the same. Before the competition begins, every squad must present itself to the appropriate authorities.

There are often three goalkeepers per squad, and the team sizes accommodate substitute players at each position. The following are some main competitions and how many squad players you will find.

How Many Players Are Allowed In Other Variants Of Soccer?

Soccer is not only played on a whole field. The game is played in a variety of forms all around the world. Also, other sports, including futsal, have professional leagues.

Consequently, the number of players on a professional soccer team varies depending on the format in which the squad is competing.

Formats like 5v5, 6v6, and others are simple to figure out. On the field, each team may have as many players as indicated in the format’s name. 5; 6; and so forth.

Futsal is one of the most often played soccer sub-styles. The majority of the time, it is played indoors on hard courts.

Each team has 5 players, one of these players is the goalkeeper. In addition to this, the field is considerably smaller than the full size.

Another alternative is beach soccer played on the beach. Although soccer has been conducted as pickup games on beaches since the 1990s, its regulations are now being formalized. Either team can have up to 5 players during the game, much like in futsal.

Another very well-liked soccer variation is indoor or arena soccer. Indoor soccer is played on artificial turf, whereas futsal is conducted on hard courts. It is typically played between teams of five or six players, along with a goalkeeper.

As a result, the amount of players you can have in your soccer team can vary depending on the type of soccer you are playing.

A lot of different factors will contribute to how many players are part of a soccer team. For professional games and over 12-year-old teams, there are usually 11 people on each team.

Then there are a number of substitutes and extra players in case they are needed. Additionally, there are a lot of rules to how many people can be on the soccer pitch during a game at any one point. Thus, it is important these rules are followed for a fair game.