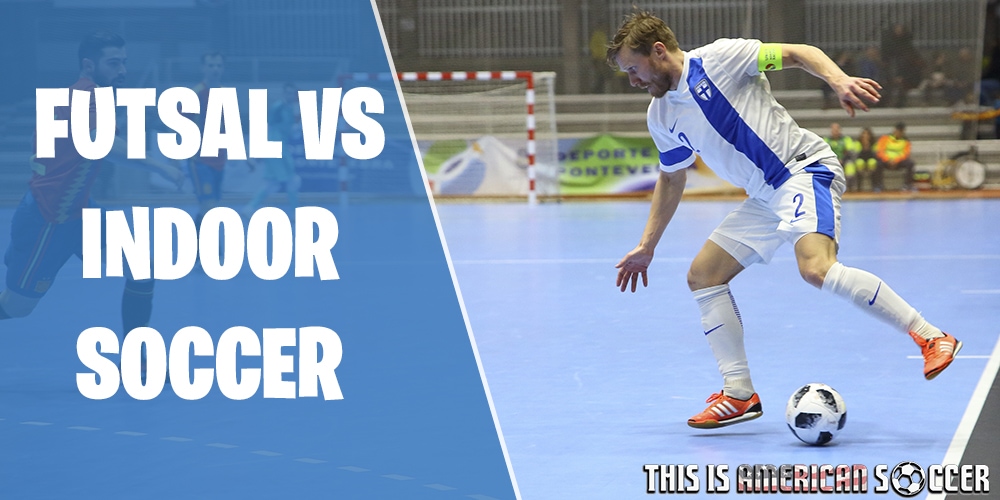 This article explains the difference between indoor soccer and futsal, the history of the two sports in the world and the USA, and the equipment needed to play them.

In a nutshell, indoor soccer is played on turf, has walls, and a normal ball. Futsal on the other hand is played on a court with no walls and a special ball.

So why? You may ask, do both exist and what makes them unique? Well, those are both very good questions, and ones that we hope we can address for you in this article!

The origins and styles as well as the equipment of futsal (also known as five-a-side soccer) and indoor soccer (or six-a-side soccer) are very different, so let’s compare the two.

The birthplace of futsal was Uruguay, 1930. It began with the youth of the area playing on indoor courts rather than in the streets to prevent injuries. It soon became popular in South America, and grew to become the second most popular form of soccer played in the world.

Because futsal is originally derived from being played on a basketball court, the court is hard, and the ball is different. The size of the field restricts long play, forcing the players into more offensive techniques, and better ball control, each player gets more touches of the ball honing their skills, in a way that is excellent for player development.

Many a famous name started their careers and are advocates of practicing on a futsal court, Cristiano Ronaldo, Andrés Iniesta, Lionel Messi and Pelé to name a few, in fact, Ronaldo is quoted as saying “…If it wasn’t for futsal, I wouldn’t be the player I am today.”

Futsal is played on a hard wooden or ceramic surface, and for obvious reasons different footwear needs to be worn because of the surface of play, rubber soles give more traction, and spikes or cleats used for regular soccer are not permitted.

The court itself is smaller than a regular soccer field, and is marked by touchline boundaries. The walls are not used as part of the game, which is different in indoor soccer.

The game is played between 2 teams of 5 players, hence the name, 5 aside. One goal keeper, two wingers, a forward and a defender per team. Unlike a regular soccer game, where you’re allowed 3 substitutions, in futsal you can just keep them coming! Subs are unlimited.

The ball is smaller and harder than a regular soccer ball, and is low bounce.

A match is played over 2 x 20 minute periods, with a 15 minute interval. Regular soccer games are a whopping 90 minutes of play, and an indoor game is 60 minutes split into intervals.

Goals in futsal are about 1/3 smaller than regular soccer goals, and you can fit a futsal court into a regular sized pitch about 8 or 9 times…just let that sink in! That’s like running around Jupiter with spikes trying to kick a space hopper vs whipping around on the Earth’s surface in your sneakers kicking a regular ball.

You can imagine the impact that this would have on your technique and dribbling skill. The mix of rules, surface and ball type place emphasis on creativity, improvisation in close quarters, and accuracy when it comes to scoring.

There is no offside rule and there are no throw-ins and no slide tackles, a player can’t go to the ground to regain the ball. There are two referees rather than three in a regular soccer match. 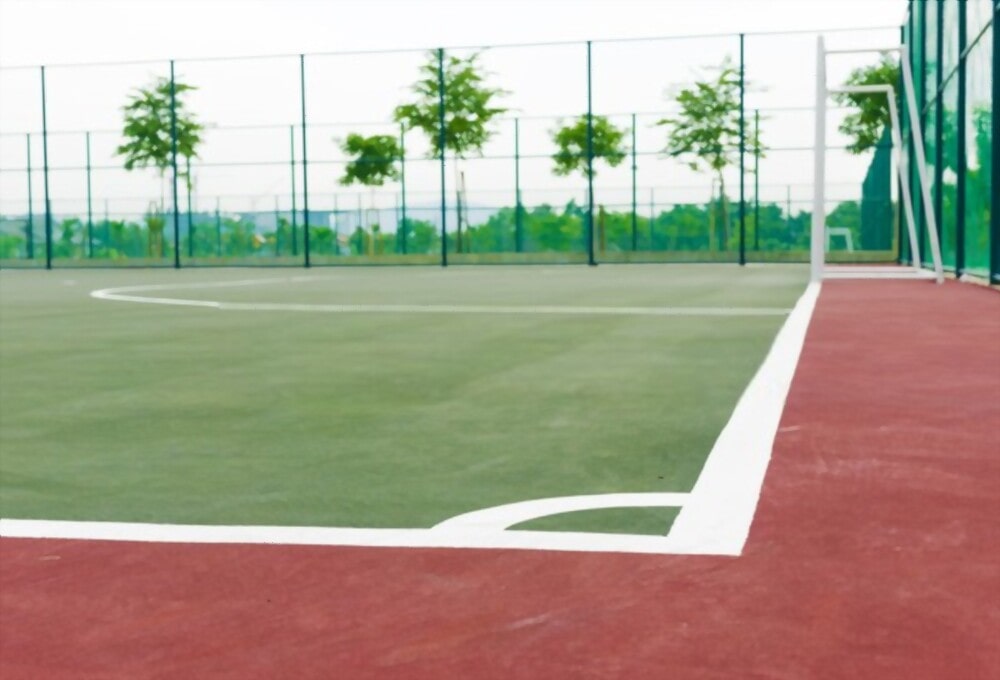 What is indoor soccer?

The roots of indoor soccer can be traced back as far as the 1800’s, but became more popular in the 1970’s in the U.S. The popularity of indoor soccer comes from inclement weather in winter making it impossible to play outdoors, so hockey rinks or similar are converted into a playing area so that the game can be played all year round.

The field for indoor soccer is generally made of synthetic turf, and is oblong in shape, and is more commonly than not the size of a hockey rink. If the field is artificial turf, then a special pair of turf shoes is required.

The ball is also different, and is usually made of suede or felt, much like a big tennis ball. They are softer than outdoor balls, and bouncier, making goal scoring a more difficult prospect.

The game is played over 60 minutes with 3 minute intervals after every 15 minutes of play, and as with futsal, subs are unlimited.

The goal is on average, slightly smaller than a regular soccer goal, and larger than that used in futsal, and is commonly recessed into the wall.

Most games are played with a team of 6 members. Two defenders, two forwards, (or attackers and strikers) a midfielder, and the goal keeper. The defender has to cover more area than in futsal.

The biggest difference between indoor football and regular football or futsal is that players can play off of the walls, bringing a new dynamic, form, and specific skills to the game. This improves tactical awareness as the walls can be considered an extra static team mate. 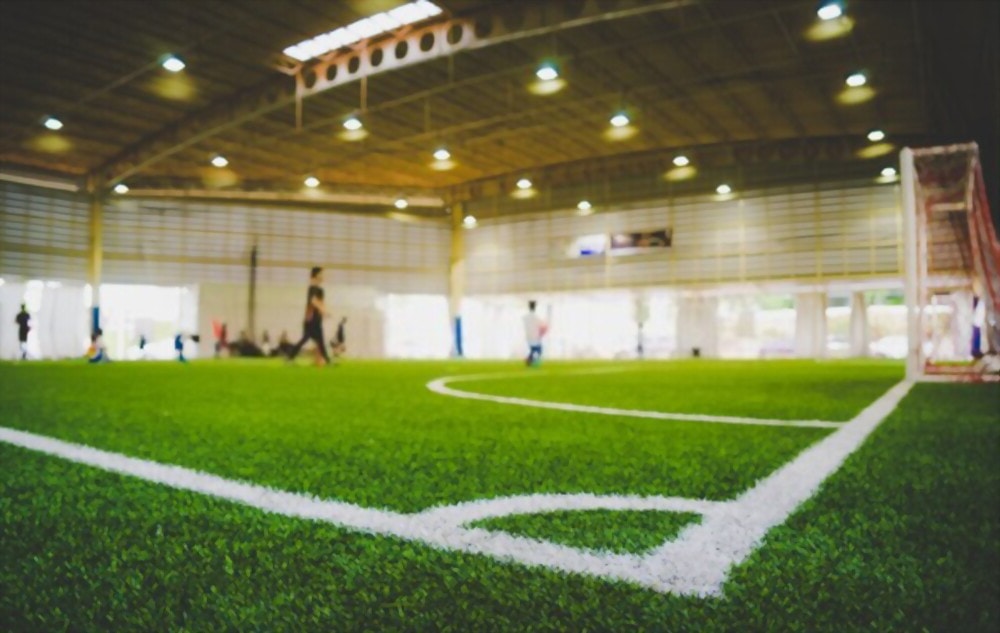 What is needed for futsal or indoor soccer?

A futsal goal. There are two variations, a portable goal which can be dismantled and erected at will, or an aluminum goal. In U.S futsal the former can not be used in FIFA regulated games unless certain criteria is met.

For more info refer to resources.fifa.com.

In competitive games, the players are required to wear numbered shirts with sleeves, shorts, socks, shin guards and suitable footwear.

The goalkeeper is required to wear the same. However they can wear long pants, and they also need a good pair of goalkeeping gloves.

The colors of the clothing is important. The two teams have to wear colors that make them distinguishable from each other. The goalkeeper has to wear colors different from those of the team, the other goal keeper, and the officials.

Appropriate footwear is essential to the game, the safety of the players, and skill development. They should be flat, with rubbery souls which makes them good for traction. They are often called indoor soccer shoes…but are not to be confused with turf shoes, generally used for indoor soccer.

An indoor soccer goal is required, this is larger than a futsal goal and smaller than a regular goal. Portable versions are available, but regulations must be adhered to for official games on goal structure and securing.

In competitive games, the players are required to wear the same clothing used in futsal.

Cleats are required in indoor football if playing on turf. Turf shoes are usually used by players, and are favorable because they have smaller cleats on the outsole made of rubber, adding to traction and are designed to cut down on injury and foot pain. 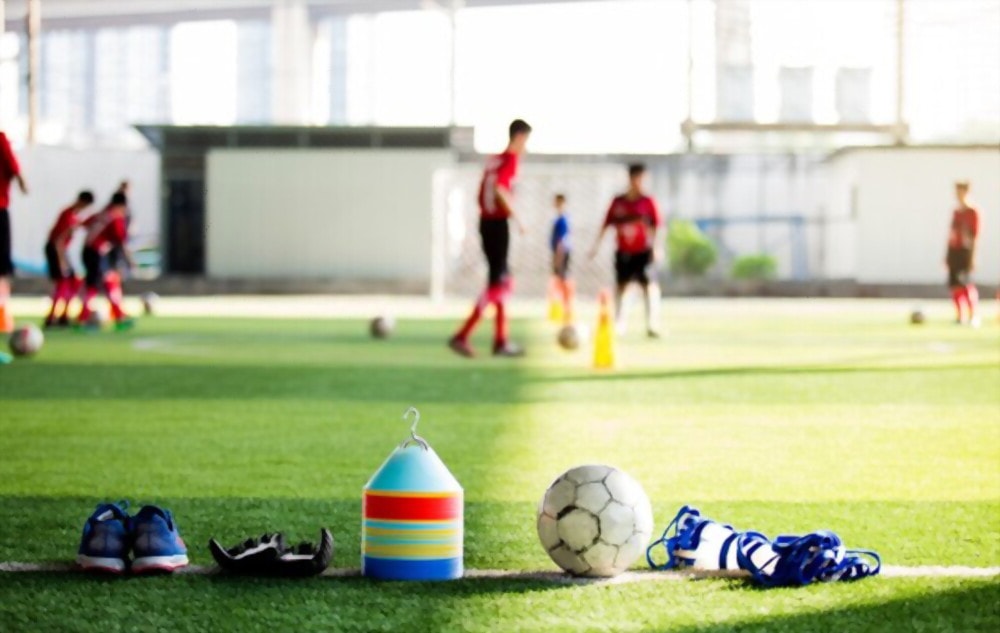 Can I wear indoor soccer shoes on turf?

No. Different shoes must be appropriated for different surface types and for prevention of bad practice, or injury.

No, the only circumstances that turf soccer shoes can be used indoors is when the playing surface is artificial turf, if there is no artificial turf then flat, rubbery indoor shoes should be worn.

Looking for related or relevant sources?

Below you find a list with all the relevant or related sources we’ve used:

Janet Phelps is the owner and founder of This is American Soccer and an avid soccer lover! She played soccer for about 25 years in Flagstaff, AZ. She was forced to stop playing because of a permanent injury!