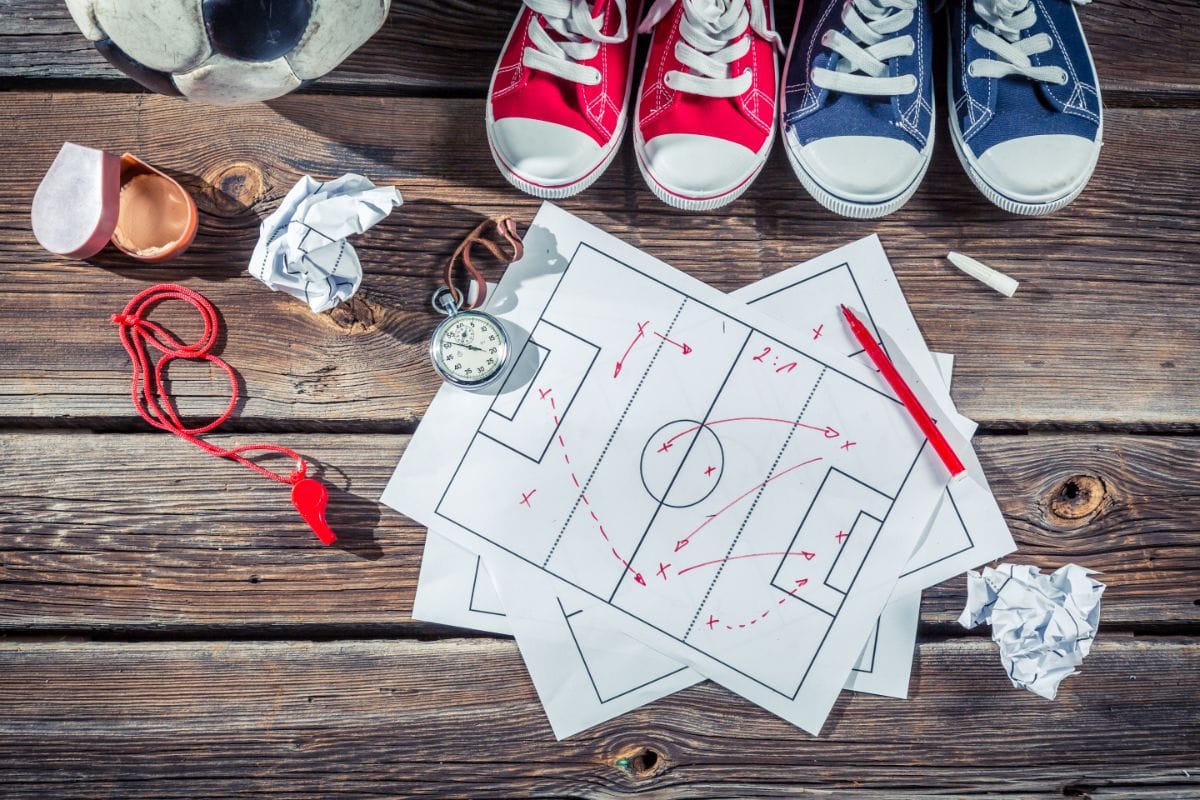 Choosing the right formation in a soccer game can make or break the final result, and it is important to have a solid understanding of what works best for your team and players.

To help, we have put together nine of the best soccer formations in the game – read on to discover how to take your team to the next level.

The 4-3-3 formation was popularized largely due to its prevalence in the Italian national team and is the perfect option for teams who are looking to make the most of their speedy players, and who enjoy a fast-paced play style. The formation uses four defenders behind a midfield line of three players.

The midfielders are the key to this formation, as they all operate differently. One will be more defensive, one focus on attacking, and one will be somewhere in between, adapting to the game as the action occurs.

This allows you to control the tempo of the game by changing direction as needed, and means that speed is needed, as there is a lot of ground to cover.

This is a favorite formation of many world champion teams and requires a well-oiled team who can pick up the pace when the game calls for it.

Also Read: How Can You Prevent Injuries in Soccer?

This formation is a narrow one, and relies heavily on the middle-central midfielder; this individual will be the main playmaker of the game.

Also known as the “Christmas Tree Formation”, this is a great defensive option, with three midfielders in the center two attacking midfielders in front, and a striker at the point. This is a slow and steady defense that is hard to break through, but if done correctly, can be very effective.

The formation has, on occasion, been criticized for being too rigid, but when used appropriately, it can be flexible and versatile enough to adapt to any situation – as long as players make sure that they are aware that the wider areas of the pitch can be vulnerable, and act to counter this as needed.

A variation on the 4-3-3, the 4-5-1 is a classic formation that places the main focus on defensive playing. It consists of four defenders, five midfielders, and one striker, and is often seen as the default formation for smaller teams, as it is easy to implement and maintain.

It may not be the most glamorous or exciting formation in a match, but this is a great way to ensure that you have a rock-solid defense that is tough for the opposition to penetrate, and which gives you an advantage over the other side.

The 4-1-4-1 is typically cited as one of the strongest formations in soccer, and is certainly one of the most popular.

Consisting of four defenders (often referred to as the “back four”), a holding midfielder, four midfielders, and a striker, this is a strong defensive formation, but one that also places a key focus on the offensive elements of the game, offering the balance needed to take on a range of more challenging teams.

The key to a successful 4-1-4-1 is a team made up of strong individual players – each player must know his role and be able to perform it effectively.

Also Read: What’s The Difference Between Indoor Soccer and Futsal?

The 3-5-2 is another formation that is often overlooked but is actually quite powerful, with a particular rise in popularity during the 80s and 90s and has seen a comeback in recent years. This is a compact formation, allowing the players to move quickly from defense to attack, and back again.

It is a good choice for teams who like to keep things tight and defend deep and keep the opposition on their toes. The only real issue with this formation is that it can take some time to perfect; you need to make sure that your team works well together if you want to pull this off successfully.

The 3-4-3 is a classic formation, and is still widely used today, and is a popular choice with flexible, versatile midfielders who are fast on their feet and alert to any sudden change in the game.

Midfielders are required not only to help with the offense and kick off the attack, but will also be expected to drop back and assist with defense as required – you need your top midfielders in tip-top shape to pull off this formation successfully.

The 3-4-3 is also great when you are up against a team with some seriously world-class players, but does require plenty of skill – this is not one for the faint-hearted.

The 5-3-2 features three central defenders who almost always take on the role of sweepers, giving them the ability to cover large amounts of space while opening up the potential for maximum opportunities.

This is a very balanced formation and is ideal for teams looking to play defensive soccer, as it can be very difficult to break through.

Games are less focused on offense, and there tend to be lower scores in games using this formation, but this does offer plenty of chances to win – and in games where a win is all that is needed, the 5-3-2 can make all the difference.

Also known as the Magic Rectangle, the 4-2-2 is a formation that offers excellent flexibility and versatility, making it a favorite among coaches around the globe.

The formation features a rectangular shape and can be adapted depending on the strength of players, the skills of the opposition, and the style of play. It’s a solid option for teams who want to mix it up and play attacking football, or those who prefer to sit back and soak up pressure.

The 4-4-2 is an extremely versatile formation and is among the most common formation used by professional clubs across the globe, largely due to the balance it offers.

This is a formation that allows teams to focus on attack and defense simultaneously, making it a great option for teams who want a more fluid approach to their play.

How To Choose The Best Formation For Your Team

So, now that we have taken a closer look at the best formations for a soccer match, you may be wondering how you go about choosing the best formation for your individual team. There are a number of considerations here, and these include:

One of the key elements to impact the choice of formation will be the preferred playing style for your team. If your team plays a high-tempo, possession-based game, then a 4-4-2 formation might work better than a 5-3-2 would.

Conversely, if your team prefers a slower, more methodical approach, then a 4-5-1 formation could be more suitable.

Ultimately, you will need to take a close look at your players, and the way in which they work as a team – this will allow you to highlight strengths that make the right formation as close to unbeatable as possible.

For this reason, it is always important that you do plenty of research on the team that you will

be facing; this will help you identify what type of formation will give you the best chance of winning. Remember that this is likely to vary from team to team, so be prepared to adjust your formations and play style accordingly.

It is also worth considering the strengths and weaknesses of each player on your team. Some players are naturally suited to certain positions, while others are not.

If you have a striker who is particularly adept at scoring goals, then he should be given the freedom to roam around the pitch and create chances for his teammates. This means that he needs to be played out wide rather than centrally, where he will be forced to stay deep and defend.

Similarly, if you have a midfielder who is very comfortable working the ball into the final third, then he should be allowed to move freely between central areas and the wings.

Again, this will mean that he won’t be able to perform well when defending or tracking back, but he can use his mobility to get involved in attacks.

In short, the ideal formation for any player depends on their strengths and weaknesses, and this is something that you must carefully consider before deciding on a formation.

Finally, you will need to think about how your team matches up against its opponents. For example, a team that likes to sit back and soak up pressure will struggle to break down a side that relies heavily on counter-attacking soccer.

Similarly, a team that likes quick transitions will struggle to cope with a side that prefers to build slowly through the middle.

Ultimately, your decision will depend on the type of soccer that you prefer to play, and the type of match that you are preparing for.

As you can see, there are many factors that go into choosing the perfect formation for your team. This is unlikely to remain the same for every game that you play, and as a result, you will probably need to adapt your tactics throughout the season.

However, by using these four simple tips, you should be able to choose an effective formation that suits your team perfectly and increase your chances of that all-important win.